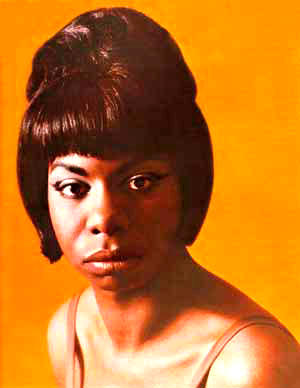 On Sunday, May 8 (Mother’s Day), Simone, the only child and daughter of legendary music artist Nina Simone and the only person qualified and artistically capable of carrying on her mother’s legacy, will re-launch www.NinaSimone.com to share with the world – the mother and the artist – from a daughter’s perspective through the redesigned web site.

Simone will be honoring her Mother this year by capturing the milestones in her mother’s career, as well as the peaks and valleys of her celebrated life. In addition to intimate details and personal stories, www.NinaSimone.com will fully explore the many nuances and flavors that made up the more than 40 original albums in the Nina Simone library. The site will also feature “Nina Simone Radio,” a 24 hour/7 day-a-week internet radio station providing hundreds of recordings spanning over four decades, interviews and special guest commentary. Other additions to the site will include unreleased Nina recordings, archived video performances and an expanded photo gallery with previously unpublished photos of Nina behind the scenes and on-stage.

An icon of American music and one of the most extraordinary artists of the twentieth century, Eunice Kathleen Waymon was born on February 21, 1933. She was a classically trained pianist, the consummate musical storyteller, a griot as she would come to learn, who used her remarkable talent to create a legacy of liberation, empowerment, passion, and love through a magnificent body of work. She earned the moniker ‘High Priestess of Soul’ for she could weave a spell so seductive and hypnotic that the listener lost track of time and space as they became absorbed in the moment. She was who the world would come to know as Nina Simone.

When Nina Simone died on April 21, 2003, she left a timeless treasure trove of musical magic spanning over 40 years from her first hit, the 1959 Top 10 classic I Loves You Porgy, to A Single Woman, the title cut from her one and only 1993 Elektra album. While thirty-three years separate those recordings, the element of honest emotion is the glue that binds the two together – it is that approach to every piece of work that became Nina’s uncompromising musical trademark.

“The vision I’ve always held, with regards to my mother’s legacy, is finally gaining momentum,” stated Simone. “NinaSimone.com will allow fans around the world to have access to her life, enjoy her music and revel in her message like never before. Mommy’s legacy continues and this is just the beginning.”

Among other popular recordings are Don’t Let Me Be Misunderstood, I Put A Spell On You, Four Women (whereby Simone recorded a newer version of her mother’s original classic for the movie soundtrack “For Colored Girls), Nina’s own anthem of empowerment, the classic To Be Young, Gifted, & Black, and Feeling Good which was recently covered by pop diva Jennifer Hudson.

In addition to being the executor of the Nina Simone estate and her mother’s biggest fan, Simone is her own woman, a singer, songwriter and performer whose ability to transcend genres echoes the tradition of her mother. Blessed with a rich vocal range, an innate skill for lyrical interpretation and a soul-deep understanding of music as a means of healing, empowerment and celebration, Simone is very much her mother’s daughter. She is most assuredly a multi-talented artist in her own right.

Simone has many exciting projects in development for release over the next year including a double Nina Simone CD, which Simone will produce; Simone’s own second CD release; and an “I Put a Spell on You” European tour.